Come away from the beach, children. Put that down, Zak. Shush, all of you, into the hut. Gather round, be quiet and listen. I have some important news.

Yes, I know I don’t normally take classes, Eva. Miss Whitehead is…ill. I’m going to talk about the forest today, and how it first arrived. Listen carefully. Your lives depend on it.

Yes, Zak, I was there at the beginning. I witnessed it all. If you pipe down and let me, I shall explain.

Billions died. Spiked leaves tore our skin. Sap burned our flesh. Roots shattered the concrete and the glass of our cities. Yes, Tam, there used to be huge cities in those days, with buildings so tall they scraped the sky and more people living in each one, I dare say, than are alive on the whole planet today. The compute clouds crashed and the tablets died, and nobody knew what to do. Old magic, gone forever now; destroyed by a threat no one could have foreseen. One day we were masters of our planet, the next — we were prey.

Claw-trees, blood ents, triffids, call them what you will: we still don’t know where they came from. No, Zak, not even someone as old and wise as me. Some say they arrived by meteorite shower; others claim they’re a bio-warfare experiment gone wrong; still others say they were always here, lying dormant in the ground, just waiting for the levels of atmospheric carbon dioxide to rise. Who knows? Everyone has their favorite theory.

The forest sprouted all at once, overnight, across the whole planet. The world belongs to the forest until we can take it back again.

What’s that, Eva? Yes. I was married then. No, no children…and for that, I’m grateful. Don’t look so shocked. Because they would probably have suffered the same fate as my David, that’s why. He fell to the trees. His flesh became the dark soil upon which they thrive.

How did he fall? If you’ll listen, I’ll tell you.

He was a scientist. A sort of…shaman, I guess you would call him now. He went into the forest, when it was still young, before it had joined up together like it has now. He and his team were the first to return. They brought back samples: leaves, twigs, saplings, and fruit.

The saplings grew out of control in the lab — but it was exposure to the fruit that destroyed David and the others. The claw-tree’s shiny red fruit, their scent irresistible. A pheromone effect, tapping directly into the limbic system; a kind of sexual attraction. Yes, like, ah, between a husband and wife, Eva. Only much stronger.

Sit down, Zak. Of course I don’t know exactly how they smell. I wouldn’t be here, otherwise, would I?

We had no idea at that time of the consequences. Once the technicians took off their suits and were exposed to the samples — they couldn’t help themselves. Once eaten, the seeds germinate. Roots spread through the gut, connect with the nervous system, take control of the victim. How do I know? I’m — I was — a pathologist, before the forest came. No, nothing like a ranger, Eva. I studied disease. I…used to look inside people. Dead people. To see what had killed them.

I cut them apart, that’s how.

Yes, I cut my husband, too.

Because we had to know, and I was the only one left.

Once the seedling takes control of the brain, the victim becomes just another leaf in the forest. For a few hours, they stay looking human. Yes, we tried to communicate — but they just laughed at us. Then the laughter turned into this horrible sound, this wailing…you’ve all heard it, in the night, at the edge of the village? The fires keep them away, for the most part, the possessed, the dryads, the tree zombies, whatever you call them. Yes, Tam. That’s exactly what happened to your uncle; that’s why you must be careful near the forest. If the trees can’t grab you, they’ll lure you in and turn your brain into mulch.

Never enter the forest or play around it. Never pick up or approach anything that’s come out of it. I don’t care if you already know this, Eva; it’s worth repeating. If you see the red apples — they’re round, red things, Zak, like a ball, about the size of your fist; no, nothing like a starfish — run. Run and tell an adult. Never go back to it, never try to pick it up. Are you listening to me, children? It’s dangerous.

Good. Now there’s more. Something new. Until now, the shore’s been the only safe place…the claw-trees avoid the sea. The salt, probably. But that’s changing — Zak, Eva! What are you two doing? Stop that and concentrate: I said this is important. A few days ago, reports started to come in from the other communities along the coastline.

Claw-trees, or something like them, have begun to wash up on the shore. Matted nets of crawling, mutated kelp, and worse. We haven’t heard from the people from the islands for some time now. Not even smoke signals, like we used to.

Settle down. Here’s the most important thing I came to tell you. The most important lesson. Don’t lose hope. Yes, hope. We must clutch it, cherish it. Despair is our ultimate enemy. I wouldn’t have survived these long years beside the forest if I hadn’t believed in hope. You, children, are our hope for the future.

Zak, sit down. I’m still talking. I don’t know what you think is so funny. You’ve been so badly behaved this morning, it’s intolerable.

Bring it here at once, Zak.

Yes, it does smell wonderful.

(Originally published in Nine: A Journal Of Imaginative Fiction, 2012, and reprinted at QuarterReads.) 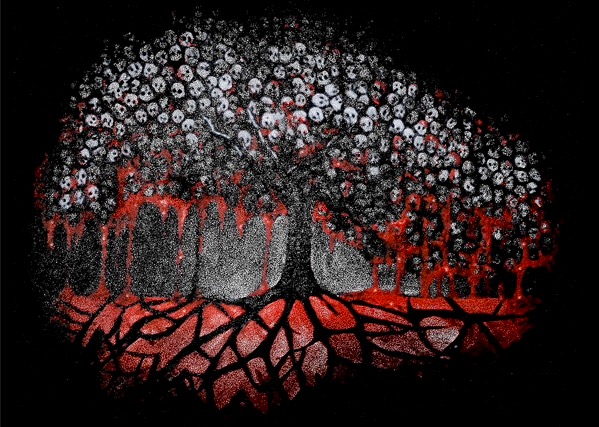